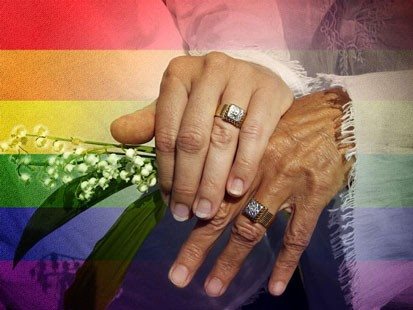 Gay marriage is currently legal in a small percentage of countries worldwide.

For many, marriage is seen as a unique relationship between a man and a woman, with the purpose of having children and raising a family.

In the past, interracial couples faced scrutiny when they attempted to marry. In addition, couples that were interfaith faced opposition.

However, gay marriages need to be recognized by the government in order for couples to enjoy all of the rights and responsibilities generally afforded to marriages of opposite-sex couples.

Until fairly recently, only opposite sex, white couples were permitted to marry in the United States. It was also common practice that people would only marry a partner with a common religion.

For example, a Jewish woman was unlikely to marry a Catholic man. In fact, the couple would likely face opposition from both families, as well as the churches they belonged to. In the early 19Th century, African American couples were not able to be legally married.

At one point, polygamy was legally allowed in some parts of the United States. In that case, a man would be allowed to have multiple wives. However, marriage has most recently been defined as a union between an opposite-sex couple.

In fact, there are no defining restrictions of marriage that include race or religion. Gender is currently the only defining characteristic required for couples to be legally married in most places. In fact, couples must be the opposite sex in most cases. However, many countries are beginning to offer gay marriage the same legal recognition that interracial and interfaith couples now enjoy.

Traditionally, marriage was seen as a means to raise a family but that definition is now expanding to include simple recognition of a couple’s relationship. Gay marriages are currently recognized in many places worldwide.

However, gay marriages are not as recognized, as civil unions or domestic partnerships. In fact, couples are afforded different rights depending on the legally designated label of their relationship.